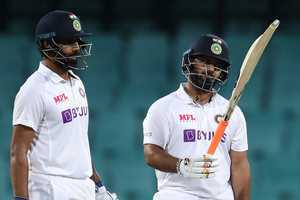 Hanuma Vihari and Rishabh Pant scored an unbeaten hundreds on Day 2 of practice match. On other side, Shubman Gill and Mayank Agarwal scored useful fifties as India XI took control of proceedings against Australia A at the Sydney Cricket Ground. India XI are 386/4 at the end of play on Day 2, leading by 472.

India didn’t begin the day on a good note, with Mark Steketee taking wicket of Prithvi Shaw. This goes on, Agarwal and Gill joined forces to establish a second wicket partnership of 104. Later, against the run of play, Gill got out to Mitchell Swepson, with Sean Abbott pouching a fine catch in the slips. Then, Jack Wildermuth, all-rounder of Australian A dismissed Mayank with Patrick Rowe takinh the catch in the deep.

This time India XI was on 161 for 3, here comes Rahane and Vihari strung together another useful partnership of 78 before Steketee took Rahane’s wicket. Now, here comes Pant and along withj Vihari sharing an entertaining and unbeaten stand of 147 in just under 23 overs. Vihari completed his hundred with a single in the 86th over.
Meanwhile, Pant started to play in fifth gear and started to smashig fours and sixes.
The wicketkeeper-batsman end the day with nine fours and six sixes. Pang reached his century at the final ball of the day with a boundary. With this hundred, Pant also shut the mouth of those who were criticising him.

Earlier, due to his poor performance, he lost his position in Indian ODI and T20 team, but this century he put forward a great contender to get into India’s playing XI for the opening Test in Adelaide.

Google will open up spaces in the US to serve as a mass vaccination site...