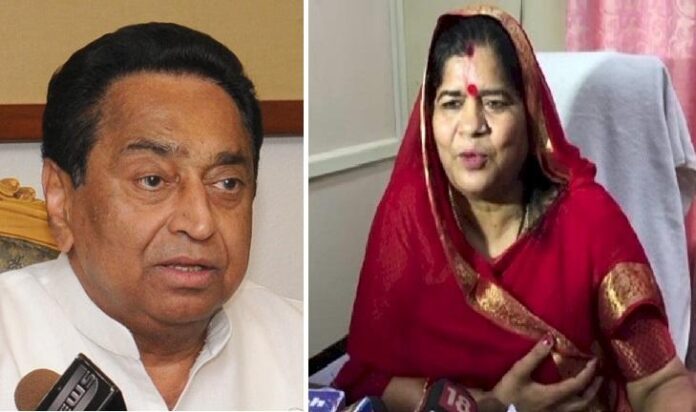 Cabinet Minister Imarti Devi of Madhya Pradesh has strongly opposed the statements made by former CM Kamal Nath referred to her as a “ITEM.” The BJP leader, furious over the remark, suggested that Congress President Sonia Gandhi expel Kamal Nath from the party.

Sonia Gandhi was also asked by Imarti Devi if she would ever tolerate such comments about her daughter “Priyanka Gandhi”.
“Such people (Kamal Nath) have no right to stay in Madhya Pradesh…I demand Congress president Sonia Gandhi remove from the party. She is also a woman and a mother, will she tolerate if anybody says something like this about her daughter,” she told news agency ANI.

READ  To Financially Support Her Family, Nora Fatehi Started Working At Age Of 16

“Is it my fault that I am poor and born into a Scheduled Caste (SC) family? I want to request Sonia Gandhi not to keep people like Kamal Nath in Congress. If Kamal Nath uses such a language against me then what will happen to women of the SC community. How can any woman move forward?” Imarti Devi told ANI.

“I want to ask the Congress party to teach a lesson to Kamal Nath type Leaders. It’s my fault that I have a name called Imarti. I used to treat Kamal Nath as my elder brother, but he insulted me today. I’d like to tell him you’re not suitable for politics, she told.

“Kamal Nath Ji, this is India where when Draupadi was insulted then an entire Mahabharat war was fought and an entire family was wiped away,” Shivraj warned Kamal Nath.

The BJP has addressed about Kamal Nath to Election Commission and Chief Minister Shivraj Singh Chouhan has hit the Congress leader “Kamal Nath” and declared that he would sit in a silent protest on October 19 from 10 am to 12 pm.

Wonder Woman 1984: Gal Gadot’s husband and youngsters all have cameos