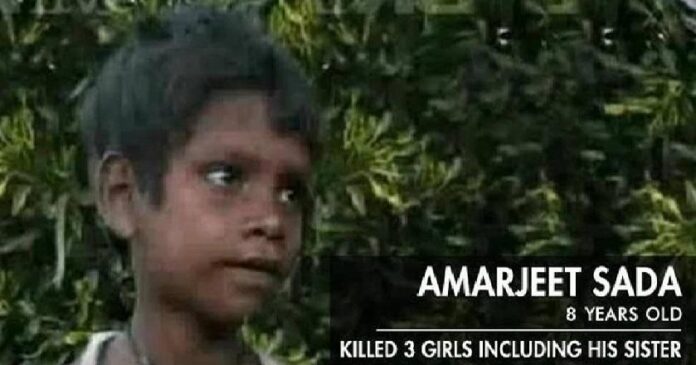 Identified as the youngest serial killer in the world, at the age of eight, he reportedly murdered three people.

In 1998, a young boy was born in the Begusaray district of Bihar, India.

The family, incredibly poor, gradually migrated to the village of Mushahari, where his father worked as a worker.

Amarjeet reportedly murdered his six-year-old cousin, the daughter of his uncle, in 2006.

“Few family members were aware of the Amarjeet Sada’crimes, as per Amarjeet ‘s uncle, but they considered this as” family matters”.

Moreover, Amarjeet Sada’s crime was not reported to the police, considering “family affairs” until the third murder of a baby girl in 2007.

The mother of the baby girl “Kushboo” had left her to sleep at primary school while she did some work, but Kushboo was missing when she came back.

The villagers, who allegedly knew of the past crimes of Amarjeet, questioned him about the disappearance of the boy.

A few hours later, Amarjeet allegedly confessed that he had murdered the baby girl “Kushboo” and tot and hit her with a brick.

Then he guided the villagers to the place where he had buried “Kushboo”.

According to sources, the young boy was taken away by police and he confessed to the murder of his sister three months ago and his cousin a year ago.

Inspector Shatrudhan Kumar said that the killings were carried out in the same way.

When Amarjeet was in police custody, Police said that Amarjeet smiled a lot, but did not speak anything.