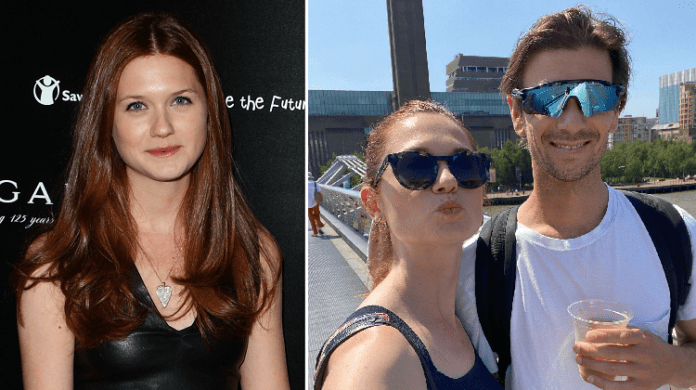 The 31-year-old actress, who is best known for her role as Ginny Weasley in the Harry Potter franchise, made the announcement to her social media fans on Sunday by revealing her wedding ring.

Her left hand now holds a gold band with a huge turquoise stone in the center, which she presented in a brief video with her hand resting on her new husband Andrew’s.

‘Yesterday was the best day of my life 💙 thanks to my husband!!’ Bonnie captioned the post.

Fans of the actress hurried to congratulate the happy couple, with her on-screen brother James Phelps, who portrayed Fred Weasley, among the first to send the couple a pair of congratulatory emoji.

READ:   Former Pakistani Prime Minister Abbasi has called on Imran Khan to quit, claiming that the government is ignorant to the suffering of the people.

Afshan Azad, who played Padma Patil in Harry Potter, was among those who weighed in, saying: ‘Love you so much.’

‘Congratulations to you both!’ said Scarlett Hefner, who portrayed Slytherin student Pansy Parkinson.

It’s unclear how long the pair has been dating, but Bonnie made her relationship with Andrew public in September 2020 via Instagram.

‘Andrew and I had been going back and forth between these two cities for a long time, so we were ready to live in the same place. This is Andrew’s house, which is now our house.

‘He has lived here for 10 years, has a beautiful garden. He’s looked after it very well.’
she said in a YouTube video.

READ:   Donald Trump is permanently banned from Snapchat over violence on Capitol Hill

On the day of the referendums, a Chinese military jet enters Taiwan ADIZ

According to a US admiral, mistrust between China and India is at an all-time high